Pink Financial Bank > Newsletter > Car Loan > As investors worry about a recession on the horizon, a record 7 million Americans have stopped paying their car loans. Here’s why

Ten years into a bull market, Americans are getting jittery about when the music will stop and the next recession will tear through the economy.

While bad economic omens are being spotted in a variety of places, last month it was a spike in auto delinquencies that spooked market participants.

The Federal Reserve reported the number of borrowers with auto loans more than 90-days delinquent shot up by 1.5 million in the fourth quarter, reaching a total of 7 million — the highest mark ever in absolute numbers, though not as a percentage of the auto-loan market, which has ballooned over the past seven years.

Consumer pain tends to be a leading indicator for broader economic struggles: An increase in delinquencies could signify waning consumer health, foreshadowing a drop in confidence and an overall spending slowdown, which affects nearly every industry.

Bad consumer loans could also inflict losses on major institutions invested in the loans, which are packaged up and sold as asset-backed securities (ABS). That has the potential, if it gets out of hand, to create systemic risk, as we saw with mortgage-backed loans in the last crisis.

So ugly consumer data is a siren alerting investors, trauma-scarred from the mortgage meltdown, to the next proverbial canary in the coal mine.

The surge in auto defaults has been a source of both confusion and consternation. The Fed called the development surprising, and Goldman Sachs analysts referred to it as “something of a puzzle,” given the broader economic and labor-market strength, and the lack of distress in other consumer credit products, such as mortgages and credit cards.

Why are auto-loan defaults surging, and does it pose a broader economic threat that warrants concern?

The picture is complicated, but peeling back the data provides some answers — and suggests that the overall economic sunshine grabbing headlines may be falling on only part of the country, obscuring the fact that another segment in the shadows is fairing much worse.

Part of the mystery surrounding the auto-loan-default spike is the timing.

The unemployment rate is still hovering near all-time lows, foreclosures and personal bankruptcies are at post-crisis lows, and wages have been growing.

It’s also puzzling given the fact that consumers historically pay off their car loans at the expense of other debts, such as credit cards and mortgages. This is likely because a car is more critical to most Americans’ everyday life — getting to work, picking up the kids, getting groceries, etc. — and because a delinquent car is much quicker and easier to repossess than a foreclosed home.

But while auto-loan defaults are climbing, both credit-card and mortgage loan delinquencies are at historically low levels.

There are a couple of explanations for the auto-default phenomenon.

First, auto loans have exploded in the years after the financial crisis, growing steadily from less than $800 billion in 2011 to nearly $1.3 trillion in the fourth quarter of 2018.

Lending standards loosened significantly between 2011 and 2017 before tightening back up. That meant not only more borrowers in aggregate than ever before but also more risky borrowers than ever before. Auto lenders issued credit more freely, not only accepting lower credit scores but also taking borrowers at their word regarding income rather than verifying it.

“With growth in auto loan participation, there are now more subprime auto loan borrowers than ever, and thus a larger group of borrowers at high risk of delinquency,” the Fed said in a blog post about its auto-delinquency findings.

Lenders also stretched the length of loan terms over longer periods to make them more affordable, Goldman Sachs analysts Marty Young and Lotfi Karoui wrote in a research note in early March. But reducing the pace at which a customer pays off the loan increases the likelihood that “borrowers will be ‘under-water’ on their loans, with loan value above the value of the vehicle.”

At the same time, Americans became obsessed with large vehicles — trucks, SUVs, and crossovers that are substantially more expensive than small- and mid-size cars. The fact that America’s top-selling vehicle — a Ford truck that starts at nearly $30,000 — and many like it cost nearly half the median household income hasn’t stopped people from buying them and hasn’t stopped lenders from facilitating loans.

The average car payment hit a decade high of $545 during a month in the fourth quarter, according to Experian data. The average interest rate also hit a decade high, to little surprise given the record number of subprime borrowers, who pay higher rates to compensate for their risk.

Of course, most borrowers don’t stop paying a loan the moment they buy the car — even if it was ill-advised.

But even amid the surge in lending, especially to less credit-worthy borrowers, shouldn’t the 10-year bull market and sterling economic conditions provide a buffer? Shouldn’t there be less financial pressure on households that would cause them to stop paying their loans?

Focusing on the rosy economic data in aggregate hides the highly uneven nature of the economic recovery and the fact that many Americans remain cash-strapped.

There’s been a two-tiered recovery, UBS analyst Matt Mish said, where on one hand, those who hold assets have done very well.

“Those who do not own assets, whether a house or equities, have not benefited as much,” Mish told Business Insider.

“You’ve seen a pretty decent increase in debt in the latter cohort,” he added.

Mish and his colleague Stephen Caprio focused on how the divergent consumer recovery influences credit risk in a report last year, finding an elevated number of consumers burdened by debts that dwarf their incomes, along with small amounts of liquid assets saved to deal with those financial obligations.

This phenomenon has been masked by a reliance by investors on the Fed’s aggregate data — which skews toward the wealthy. The median data UBS presents show more significant consumer financial struggles.

“This highlights how consumer inequality is a blind spot to the aggregate metrics that investors rely upon. As income inequality grows, aggregate data becomes less representative of the population at large,” UBS analysts wrote in the report.

Many American households deleveraged after the financial crisis, primarily by trading homes in favor rentals.

But rents have surged, UBS said, amid growing demand and lack of affordable home-buying options.

Strong employment and an uptick in wage growth may ease this burden, but if the recession everyone is on edge about materializes, it could mean significant losses for investors in lower-tiered consumer debt.

Is there a broader risk?

As some have already pointed out, it’s unlikely auto-loan defaults will usher in the next financial collapse or recession.

In part, this is because they’re less systemically risky.

The total auto-loan market is about $1.3 trillion, compared with $11.2 trillion in the residential mortgage market when the financial crisis struck, adjusting for inflation.

Moreover, specialty auto-finance companies — which aren’t large or diverse enough to affect the economy as deeply as banks do — have been doling out subprime loans with the most gusto, with half their $150 billion position originated on credit scores below 620, according to the Federal Reserve.

“We think the risk is remote,” Goldman Sachs wrote, addressing the concerns among market commentators of risk to financial stability.

In Goldman’s view, auto delinquencies pose little risk of contagion but are rather a “sector story,” with risks confined to the subprime auto industry.

The delinquency uptick, the analysts said, is isolated almost exclusively among people with non-prime credit scores. In auto-loan ABS, for instance, the 90-day delinquency rate remains below 0.5% for prime loans, while the rate for non-prime loans has surged upward to nearly 5%.

Even within subprime auto ABS, the outlook isn’t particularly morose because of “the large extent to which high losses have already priced into high borrower interest rates.”

This may be good news for investors, but it’s no consolation for the cash-strapped borrowers covering those interest payments and defaulting on their loans.

Their struggles may not pose a broader economic threat at the moment, but they show the 10-year economic recovery hasn’t been as broad-based as many believe.

The Fed’s analysis of the auto-loan market illuminates the divergence: By one standard, the “overall auto loan stock is the highest quality” since they began tracking data, with 30% of loans from borrowers with credit scores exceeding 760 — very good to exceptional. At the same time, we have the most subprime borrowers — and the most serious delinquencies — on record. 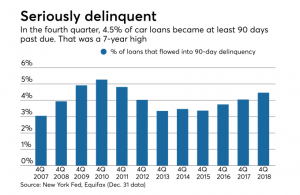 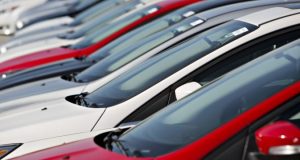 A simple change to push bank subsidies to depositors